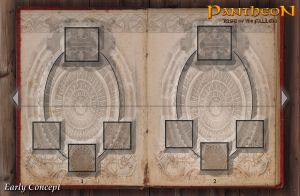 This extraordinary book will serve as the complete compendium for your Class' special abilities. The first section of the Codex, labeled "Essential", will contain the host of standard abilities that characters can naturally train throughout their lifetime. However, in Pantheon, many of the most powerful and exotic abilities can only be found out in the wilds of Terminus: from heavily guarded treasure vaults, dangerous enemies and unimaginable locations -- these most powerful abilities are written on legendary parchments known as Prime Scrolls. The second section of the Codex, labeled "Transcendent", is built for the scribing and intensifying of these powerful Prime Scroll abilities.

The accompanying image shows the Transcendent section of the Living Codex, where Prime Scroll abilities will be scribed. The Prime Scroll will only fill the top portion of each page; underneath, there will be three empty sections that the player can mark with special items which will further enhance the primary ability. These three sections are detailed below.

Applying a Signet of Synergy to an ability will unlock different class-specific synergy effects that can be used in combination with synergy effects from other classes, sometimes to awesome effect. However, the Primary Scroll ability must be capable of synergy effects, not all will be.