The Skar is a race available to player characters in Pantheon: Rise of the Fallen.

All Skar gain an innate advantage against the Predatory disposition. (This advantage influences damage dealt and received, and may also nullify some aspects of the Disposition's effects.)

On the Skar[edit | edit source]

If there was an opposite to any good thing in every race, the Skar would stand alone in the extreme. Suicidally vicious, tribal and short-sighted, the Skar fear only their "Nine God" and are there fervent only in their hatred. A ravenous desire to consume fits with their thin, predatorial size and build, and they attack to overwhelm quickly, lacking exceptional endurance. Their role on the stage of Terminus has the most uncertainty, for their battles rage as much within Skargol as outside of it. 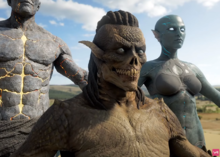 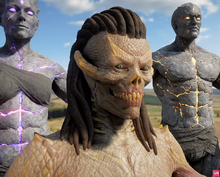 What truth can be grasped about a race that keeps no written record of its past? The futile search for knowledge regarding Terminus' most recent arrivals had been compelled more by concern than curiosity, until the Elves stole from Skargol one unfortunate informant, a young Khägan slave named Baq-Noi. Her testimony has borne scrutiny and the passage of time... horrifyingly well. It was a lense that helped burn through the fog of myths and madness that attends these awful beasts, her broken, translated words piercing a veil of fear and assumption.

“They spoke of a planet called ‘D'shoth’, but without a shred of longing. Their one deity had a name very similar, ‘D'shath’, which we learned means ‘The Nine God’. Towards it they held something much closer to hate.”

The peculiar sovereignty D’Shath consists of nine personalities at once -- or perhaps nine separate beings in one accord; there is evidence of both. In that age there was no Skar, but a race known as the Aza'gn. Once nomadic, the lands the Aza'gn inhabited on D'Shoth were not their own, and they bartered for it as a mercenary nation, leasing their bodies to the dominant military force in the region, known as "Fs'sok". (This name endures among the Skar as something of a harsh slur or profane rebuke, invoking immediate retribution and bloodshed). For generations, this treaty caused the tidal Aza'gn population to wane beneath Fs'sok campaigns as if they were moons. Lean years saw the Aza'gn retaining less and less of their freedom, descending into pure slavery to Fs'sok. Yet in this service the nation thrived, enforcing the mandates of their oppressors with stark brutality, delivering savagery upon the peoples onto which they were loosed. The familial tribes within the Aza'gn competed for the scraps of their owner, like a nation of abused, vampiric hounds. If any fault could be found in their service, it was that their effectiveness was too great, their havoc too primal. Beyond this trade the Aza'gn had no ambition, for war was the same whether slave or free.

"I overheard them call that time 'Skel H'nath'. That was the name they shrieked at all the slaves: 'skel'. Never anything else, always and every time 'SKEL! SKEL!' They even demanded we call each other by it... though we spoke our real names in secret."

Fate would've been gracious to grind the Aza'gn to dust in that era. Instead, a priestess of the Nine God altered their collective course forever. A servant of "Perish in the Nine", neither her original name or race have survived on record. What is clear however, is that her aim was to unleash the Aza'gn from slavery into a nation of warriors under her dominion. The priestess’ first act of liberation was vengeance upon Fs'sok, which left the kingdom unrecognizable and birthed the Aza'gn legacy of ruination. Drought, famine and devastation attended every gain, for there was no principle of their conquest, not even retribution -- only to consume. The whole of D'Shoth would have been eaten away in the wake of the Aza'gn onslaught, thus, the Nine God interfered. Its delivery was swift, chaining the apostate priestess of Perish for 1200 years to the Aza'gn, a century for each nation the campaign destroyed -- including their own. From the Aza'gn the Nine God took the ability to reproduce, though their inert genders would stay intact. As a sign to all who would encounter the banished race, the bones in their face and skull would be pushed through the skin, marked as heinously as the death they sowed across the realms. The Nine God renamed the Aza'gn the Skar, sealing the wound of their sins for all time.

"There was something about that name -- 'Skar'. Their hatred of it was unmistakable, yet still they spoke it to each other. It was as if they were forced to use it, as we were forced to use skel. The 'Nine God', who they honored with dead hearts... must be the one thing they respect, perhaps even fear."

Upon the priestess the Nine God lay the greatest humiliation, transforming her into the lone reproducer of the Skar, with an ever pregnant womb like that of a common colony of insects. From that day forth, she would serve as both the queen and the mother of her violent offspring. The Nine God gave her the name "Averish", calling out the black hearted lust for consuming she imparted to the Aza'gn.

"She is kept in a large chamber, far below the Dead Shear. Some skel -- slaves, I mean -- said that the Skar kept her body preserved even then, though I never looked upon her, mercifully. But I know one who did. He couldn't... couldn't say what he saw, for months. Then only, 'May she never live.' That was strange to me, but so much was horrible and strange in Skargol. And while I long to see the last of my people freed, there is much I pray to forget."

In the landfall event on Terminus the deified Averish perished, though seven Skar were pushed from her womb before she died. It is assumed by some that her death annulled the Averish Curse, as those seven Skar were able to produce offspring, as have their descendants. Whether or not this supposition is correct, the population Skargol is robust. The region itself is miserable to the eye, profane to the nose and a tragedy to the land upon which its inhabitants have desecrated. A monolithic fragment of D'Shoth -- the aforementioned "Dead Shear" -- towers into the Terminus clouds, the lone topographical feature and a marvelous silhouette that terrifies in the light of day. On the ground, the roots of the Aza'gn slave clans are still alive, breeding a chaos in Skargol like an asylum where the prisoners are their own guards -- and sometimes eat them. This culture of figurative and literal cannibalism has kept the Skar threat subdued far better than any external force could’ve hoped, and will likely do so for many years, if the Averish is truly in Death's keep.