The treacherous Rogue is far more than a trickster. With her daggers, she is a ruinous force that smiles at the dark places and unravels her enemies with terrifying efficiency. Rogues are proficient in most melee weapons, experts with daggers and poisons. They are masters of planar edged weaponry, able to detect and sever planar connections of power.

Swift, elusive and deadly, the treacherous Rogue is far more than a trickster. With daggers drawn she is a ruinous force, dwelling in the dread of her foes and smiling at the dark as if it were an old friend. In the shifting sands of this fragile era, Rogues are sought out for the faceless affairs of nations. Yet their allegiance is rarely to a banner or creed. 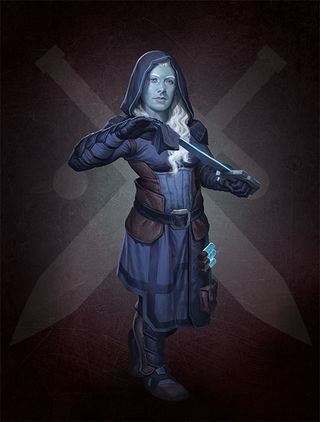 In the shifting sands of this fragile era, Rogues are sought out for the faceless affairs of nations. Yet their allegiance is rarely to a banner or creed, but to themselves. With daggers drawn, the treacherous Rogue is a ruinous force, unraveling their enemies with terrifying speed and efficiency. As melee specialists, Rogues have trained extensively with one-handed weapons, but are most deadly with a dagger in their main hand, plunged deep into the back of their enemy.

Ability Arsenal: The Rogue calls upon a multitude of skills, such as trap finding, disabling traps, and opening locks. They can also strike an opponent when they least expect it with deadly precision, oft times with a poison coated blade. Some Rogues are driven to experimentation with crafting their own devices and alchemical concoctions to distract, damage, and escape their foes.

Iconic Ability: Improvised Alchemy
Embracing life on the edge, the Rogue calls upon their knowledge of poisons and mixtures to whip up an improvised potion to hurl at their opponents. Such creations aren’t made with the level of care a dedicated Alchemist might craft, so the Rogue never knows for sure what effect they’re going to come up with until they see the result in combat .

DPS, Utility
While exceptionally skilled with dagger and blade, Rogues avoid combat unless it is on their terms. Masters of subterfuge, they plot their move from the shadows to avoid detection. They will find an opening of opportunity, or rely on their alchemical talents to create one themselves. When the moment arrives, there are few on Terminus who can match the deadly precision of a Rogue's onslaught. And fewer still who can disappear in the wake of such carnage as if they were never there.

Rogues are proficient with most one-handed weapons, being used to situations where they have to improvise with the best tool at hand. While daggers, rapiers, short Swords, and other piercing weapons tend to be their preference, they’re no strangers to most simple and militaristic weapons, including ranged and alchemical creations

Will Rogue's be able to Pick Locks?