Pantheon: Rise of the Fallen Wiki 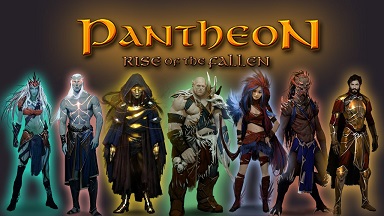 There is also great information on these official pages!
Official Pantheon: Rise of the Fallen Forums | Pantheon SoundCloud

Twitter
Tweets by @PantheonMMO
Pantheon: Rise of the Fallen News

Status of Pantheon: Rise of the Fallen

Status: Change Due
Status: Next

For more information about how to support the development of Pantheon: Rise of the Fallen, including pledges offering the ability to help in the various testing phases: see Pledge/Support the game or go to the Official Pledge page

Classes not yet available

About Crafting
About Harvesting

What is Pantheon: Rise of the Fallen?

In addition to traditional fantasy races and classes, the world of Terminus has been formed from the ‘shipwrecked’ fragments of many different realms and worlds, bringing their unique civilizations and Celestial deities with them. It is into the current age of this wonderful and mysterious world that players will step foot for the first time. Realms long lost will be explored anew. Peoples and cultures striving to gain a foothold in this unfamiliar world will form alliances and vie for power. Uncovered civilizations and awe-inspiring locales will offer new and incredible adventures for you and your friends to experience. Enter a world where the environment itself tells the story and where content is always king.
Because Pantheon values the paradigm of great risk vs. great reward, the player will always be encouraged to push themselves out the door and to embrace exploration, adventure, danger, and the community of players alongside them. Imagine an expansive, detailed, and lore-rich world where the environment itself tells much of the story. Envision challenging content, meaningful character progression, and compelling social and group-oriented game play, along with opportunities to both solo and raid. This is Pantheon: Rise of the Fallen.

The Pantheon Difference
Pantheon isn't a casual game -- it's a hard-core challenging game. Pantheon is more reminiscent of late 1990's, early 2000's MMORPG games, such as EverQuest, EQOA, Final Fantasy XI, Vanguard, etc. That being said, it doesn't require you to be logged in all the time to succeed. While the world of Terminus will consist of vast landscapes and epic dungeons, there is no reason to require players to play long, contiguous gaming sessions. Players will be able to play a couple of hours, logout, and return later to continue their journey. There will also be mechanics and features to both help people get together and group, and also to make lasting friendships. To further facilitate this, there will also be ways for players to keep their group together even if some members of the group can play longer than others or at different times. While Pantheon utilizes a number of classical game mechanics, there are many new and interesting features the game is introducing to complement the old.

Videos for 2016 and earlier