Ogres are a Race available to player characters in Pantheon: Rise of the Fallen.

Once a unified and victorious host, the Ogres require a new breed of warriors to restore their heritage of militant glory.

With their hulking presence and a culture that values the brutal skills of battle above refinements or leisure, the Ogres of Broken Maw are perilously dismissed as primitive by the uninformed. Yet careful study would reveal a race that relishes the dance of warfare tactics and in whom resides an unmatched respect for valor and courage, whether friend or foe. When calm, Ogres are cautious and considerate before action. Unseat their emotions and their incomparable size wreaks unpredictable ends.

Ghorrok. A world of glacial ranges, magma flows, expansive mountain plateaus and cave jungles where the very insects were said to grow to the size of a Terminus Halfling. On the continent of Suroth dwelt the Seven Clans of the Ogre race, coexisting only by forced observance of sacred borders. These boundaries were handed down by the deities of the Graven Hold, along with the cryptic 'Seven Tomes of War'. One bestowed to each clan, the tomes leveraged a promise of unrivaled power against a warning of permanent defeat...

"Only by seven native hands will their seals be opened.

Only under seven native eyes will their words be understood.

Only in peace will you thrive in your war.

Lose only one and none will endure."

- The Invocation of the Sevens . 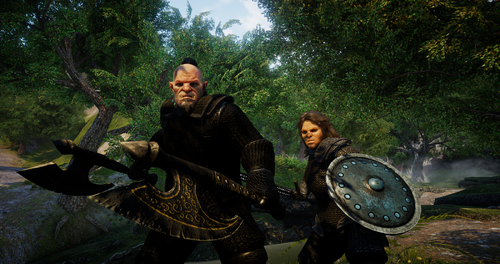 The Graven Hold hid the bulk of the tomes' knowledge within an indecipherable labyrinth of runes, until a time when the volumes would be shared amongst the seven clans equally. If even one Tome was destroyed, the pantheon would permit the Ogres be wiped from the face of Ghorrok. However, there was no mandate that they be used. Thus, within their territories each militant clan thrived to the extent they respected those limits, the vast wisdoms of the Tomes remaining untapped, for no Clan Lord would dare share his birthright with another. Each clan handled their Tome in their own manner: Bloodmare commissioned a hereditary order of mages to decipher the runes apart from collecting them all; Way of Asturr kept theirs suspended over a pool of magma beneath their mountain fortress, chained to six blind warriors spread about the cauldron, illuminated only by the molten rocks. If they perished, so did the tome, an effective if perilous tactic that illustrated the Ogre mindset in battle: "My foe dies, or we both do". The smallest clan of the seven, Black Moon, memorized the few legible runes from childhood, relying on them for survival more than any other. But from prosperity to poverty, circumstance only masked an instinct that welled up in each clan, rising from the soul of every Ogre, male or female: dominance, by right of conquest. And there exists no proving measure for an Ogre greater than defeating another Ogre.

"I believe the Seven Tomes were given to keep us from destroying ourselves, though the Graven Hold did not say this with words. I have studied for long days and nights, even from forbidden copies of other tomes, chained to the same stake as my father and his. It is all a lie, I fear. Maybe there is power in the Tomes, maybe there is not. We will never know, and that was always their purpose."

When cast upon the naked land of Terminus, the frail bounds between the clans ruptured in haste. After eons of forced restraint, total war arrived. This scale of this conflict would have consumed the race, had not a dark messiah risen from the chaos. Rothuk, Clan Lord of the Black Moon tribe, took his tribe to a mountain ridge far to the south, claiming it called his name. Into this haunt he trekked alone, with the Tome of the Black Moon, whispering that the secrets of the runes could be opened therein. Missing for weeks, as the red Ogres of Dark Sun assaulted the last of his men, Rothuk emerged from the mists and shadows, forever changed.

"Clouds of dust filled the air. Down the great bowl of the haunted lands the Dark Sun ran, numbers very great. We would bring them into our death.

Then I heard Rothuk's bellow, like a mountain when it breathes fire. The warriors of Dark Sun stopped and looked to the skies. But he was already in front of them. I still cannot say what I saw, but the wall of the bowl was covered in their blood. Their corpses are still frozen in the crust of the earth. None survived."

With the powers of an unlocked Tome, Rothuk declared himself the Black Moon King, making an unprecedented claim as lord over all seven clans. In a ruthless campaign he validated this title, slaying the six rival Clan Lords with his own hand. All opposition collapsed beneath the surging tide of the Black Moon, each Tome taken in turn. In victorious froth, the king desecrated a sacred shrine of ancient Terminus: an ominous statue of a departed Reignborn dragon. This monolith stood as a reminder of the latent authority on the planet, that of the bloodline of the Dragonking himself. Yet in one fearless stroke the Black Moon King tore off the beast’s jaw, casting the hulk at his feet, breaking its maw. In a display of gross mockery, the King set his throne inside the mouth of the disfigured regent. From that seat he unleashed the unified Ogre host upon their continent of Reignfall, though his ravenous eye cast out across the whole of the world. Yet this era of conquest was not to endure. The King was increasingly afflicted by the very powers he used to terrorize his foes. With muttering throat and eyes that "never closed to sleep", observers believed the dark curse of the breached tomes wreaked a greater claim upon the King with each victory. When the ceaseless whispers wreaked too great a madness upon him, the undefeated King abdicated his throne and vanished.

"I heard his bellow the last time. He was in great pain. I ran to look, but the King was gone. He took the Tomes with him. We were like islands behind a giant ship. Lost. All we gained on this planet, lost… Our king, lost... Rothuk, my old friend in battle... lost to the sands."

Leaderless, the Ogres were unable to hold on to their blood soaked gains. Against defeats, rivalry and betrayal, their fabled instincts seemed to have fled with their king and his books. When the Revenant forces fell upon Broken Maw, the reeling nation sought shelter in the Ashen Sanctum, themselves devastated like any common race. In this current Frail Age, the Ogres are pitched in battle again. Their bitter rivalry with the hounds of Wos Che smolders afresh, requiring warriors born of the race's native ferocity, leaders who can unify the fractured host. Yet beneath those aims burns the reclamation of the Tomes of War, a birthright stolen by their own native hand.

All Ogres gain an innate advantage against the Bloodthirsty disposition.