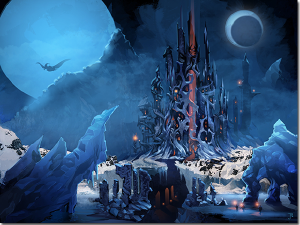 There has never been nothing.

When the thorns of Terminus press against your skin, it may not seem useful to remember the past. As you look the rose of this world in the eye, a natural beauty crowned in the splendor of her many peoples, you may think that only the blind could deny this all had a beginning. Beneath the innumerable hands of deities and pantheons, it may seem only a faithless fool should doubt such a plain thing, and with the splinters of other worlds grafted over the skin of this one, springing back to life as of old... to argue against realms beyond may sound as astute as claiming the death of the Sun after its rays retreat for night.

But I saw a dreadful power spread its wings over the cosmos, and it pierced my faith in the past. I stared into the eyeless face of an eclipse as it bore down upon my world, crowned in the dust of those it had already turned to nothing. I have felt the hands of my pantheon torn in two, witnessed that cosmic power grip the very god I worshipped with indifference, withering him to a dead husk. The ground beneath my feet splintered as my own planet's invincible beauty was crushed by an unseen hand, only a fragment of my people spared. I was blind with fear, I called the Sun dead. I believed in nothing.

Yet nothing did not claim me. This world is filled with those it did not claim, preserved by an unseen hand, perhaps at great risk. Though I have no evidence of it, there is a war waged beyond our gods for many things, and this world is one of them. To these higher sovereignties we gave our nothing, and they have given us Terminus. Though lain in a bed of thorns, this world is a cradle of infant hope for we old orphans. This is our wild, delicate cosmos now. This is our undeserved inheritance, our humble crown. And we must exhaust ourselves knowing and discovering it, lose ourselves defending it from within.

For there has never been nothing. Nor will there ever be.

- From 'The Confession of Semina', Last of the Ginto

It is fitting the Last of the Ginto race introduce the unprecedented events brought about by the collapse of their pantheon, the tragically named 'Infinite Union'. Semina, High Priest of the Infinite Union, never wavered in his clarity of what transpired, nor misconstrued the truth that the most destructive force to ever stretch across Terminus descended from one of his own gods. This is a credit to his humble character, and many who shall never know it are indebted to the pained honesty of this departed servant, the last member of a people transfigured by mercy and sacrifice. The shorthand of this vast account would say that amidst the Age of Chaos, a force known as the Revenant rose like a flooding tide across Terminus. Led by the Ravaging Lord, the Revenant host sought to exterminate the six races who were brought to the planet by a means still unknown, a power which outranks every god or even pantheon a sleepy zoo of historians could name. Doomed to defeat, the Sacred Six races embraced a prophecy that warned them to but endure the many perils and the darkness would be crushed. To this end the Six constructed three monolithic refuges called Sanctums, barricading their hopes and races within. In the face of certain annihilation, aid of divine proportion did arrive. By an act fraught with consequence, six mythical beings altered the fate and upended the fears of all creation on Terminus. Yet as these heroic warriors stepped away from the glory of their triumph, the six cast a giant shadow behind, and the inhabitants of Terminus were left with a riddle which may have no answer… Where go our gods? But who thirsty comes for a little drink? Thus, I submit a compilation much longer in the telling...

Before the Ages[edit | edit source]

Terminus has not always been Terminus, at least by name. For most of its existence, this world went by the name of Nhystyrrok and was ruled by an order of Dragonkind known as the Reignborn. At the time prior to the arrival of the "Sacred Six" races, the Reignborn and all Dragonkind submitted to the one Dragon King, Rok'Nhilthamos. (It is important to note that the term "Sacred Six" speaks to more than simply six races. Yet so formative were the events centered around the nations chiefly targeted by the Revenant -- six, all told -- that the term became a common title to address the group of new arrivals, in any sum. There are certainly more than that number, now even twice or thrice as many, with perhaps more yet to come.)

Rok'Nhilthamos was, or rather "is", a beast of such mythic size and strength that he was finally able to lead the Dragons of Air, named the Rhy'Vulrene, to utterly defeat their rivals beneath the sea, the Sol'Kromane. Yet in the wake of this unprecedented victory, the then Dragon King Rok'Tsolfyensire mourned the death of his brother and ruler of the Sol'Kromane, rather than immediately moving to name his son as heir. The son was enraged at both the dishonoring slight of his father, as well his empathy for the foe he had so narrowly defeated. The memory of his dead companions boiled over in Rok'Nhilthamos, and in a terrifying moment he usurped his ancient father and killed him. In the span of one day, both ageless leaders of Dragonkind were violently deposed on land and sea. Thus began the reign of Rok'Nhilthamos, thousands of years before the arrival of the Sacred Six.

Why is still a mystery, but some time shortly before the First Era of Collisions (as they are oft called, though few were especially violent), the Reignborn left their lands of sovereignty, or at least appeared to. In turn, all of Dragonkind similarly deferred their territories, roosts and dwellings, down even to the common spawn. This is verified by credible native peoples such as the Tholen of Itholis and the Elvonnen Giants of what is now Kingsreach. The Tholen began a new calendar to correspond with this strange new behavior, the Ithosbrun Hjilen, abbreviated as “IH”. It is certain they have not left the planet entirely, however. In fact, a persistent, fanatically believed myth is that the dragons will reap a great reward one day, far in the future. (The Sect of Peryth is one such cult of dragon seekers, whose entire devotion is bent on finding and serving the absconded beasts so they may one day share in the endless, heavenly fortune). Ask when the alleged date will arrive and the myth finds no shelter in things actually known. Yet it has abided for centuries, and is at least remarked on by the Tholen.

There is a more credible legend that centers around the time shortly before the First Collisions. It speaks to some manner of deep, mystical agreement that was struck by Rok'Nhilthamos and another power of unknown origin. As part of that agreement, Aevozul was rechristened Terminus. As significant as it is poorly understood, the fairest treatment of this agreement, henceforth called ‘The Dragon Accord’, can be found in the letters between the Human Narian Castigue and the Elf Kaolyen Greyborne. Alas, only the three letters appear to have survived to this day, though there is reason to hope more shall surface. When the Dwarves of Oldassa first arrived in the year of 7 IH, the last of Dragonkind withdrew to peculiar obscurity, most often to places of extreme difficulty for mortals to reach, often it seems to enter a “dead hibernation” for centuries at a time. (Yes, these dragons take very long naps). After the Dwarves there came the Elves, of S’iolaen in 9 IH, then thirdly the Ogres of Ghorrok in 12 IH. While the Dwarves did hold annual meetings with the Elves, the trio of nations kept mostly to themselves. In fact, after the Ogres lost their expansion-obsessed ruler Rothuk the Black Moon King to something like madness in 23 IH, the Age of Seclusion was officially begun.

Proceed to The Age of Seclusion