The Halfling is a race available to player characters in Pantheon: Rise of the Fallen.

A refreshing blend of madness and mirth, the Halflings of Wild's End have a youthful exuberance that never dims and a resolute spirit that makes them undefeatable. With the effortless stealth of a wolf and the devious charm of a child, there are few circumstances in which a Halfling cannot work for the upper hand, especially in the trees of their home. Therefore, their reduced stature is an advantage, an unassuming and agile extension of their personalities and gifts, whether in danger, discourse or dance.

Halfling dress clearly shows how different their way of living is from the rest of Terminus, but those differences don't really register to them. They fashion clothes for function and a bit of flourish, not because it matches the latest trends in Thronefast or Faerthale.

All Halflings gain an innate advantage against the Deranged disposition.

1. Increase the Dagger skill by 10 points.


The Fire of Youth

1. Grants a bonus to the effects of Consumables.

1. Grants a bonus to the damage inflicted to Wraith targets.

The Nothi draw on a deep vendetta against Molsth the Wraith King, who cursed them ages ago on their home world. They are the standard bearers for a lifelong campaign of retribution against wraiths, and slyly usurped the Esqaps in picking Wild's End as a home -- just to be close to a high population of wraiths in the Gate. For Nothi life is the hunt, mixed with playful relaxation and training. They are self-sufficient and may be gone for weeks at a time, yet they run the risk of being tainted by the Wraith's Ill, which is a sort of metaphysical madness that comes from the wraith's own unbroken curse. There are dire consequences when Wraith's Ill runs unchecked, so Nothi also seek a balance between their fervor and the need for recuperation. As for history, well, Nothi pretty much live moment to moment and don't have a great love for 'the study of old things'.

Maidyn Clan are the spiritual heartbeat of the Halflings. They are easily the most reserved and contemplative of the race, seeking to find, follow and know the Six Wards that guide their people. The Halfling Pantheon is different from the other refugee races, and may allow for interactions with the Wards that are different from other races as well. Maidyn Clan takes its name and motivation from the first Maiden Lyone, who is famous for outwitting Molsth and halting the effects of the curse, but was also a voracious student of Kiri history, Kiren the Ward of Flame, and culture in general. She knew her people would no longer exist in a few generation's time, so she dedicated herself to stewarding all she could about them. This base of knowledge is what allowed Lyone to be successful in defeating Molsth, and that is what Maidyn Clan seeks to imitate. History is far more important to Maidyn Clan than Nothi or even Esqaps.

Even from early on, Esqaps took the time to establish trade partnerships and alliances with other races, as well as providing the governmental structure for Sorhiryth itself. They harken back to the pre-curse nobility of the race, during their time as the Kiri. And because they are the ones who engage in diplomatic meetings with the international community, Esqaps have a look that is more influenced by outsiders than nominal Halflings. Their outlook is one of 'harkening back to the pre-curse nobility of the race'. That was when the Halflings were called the Kiri. During those days the people who became the Halflings aged to full maturity, and had a modest kingdom with a hereditary monarchy and a noble court. Many of today's Esqaps claim to be of the bloodline of those nobles, and their desire to lead flows from that lost status. Some demand the recognition, while others feel a sincere responsibility to their people. And this has all undergone a few hundred cycles of Halfling generational wash, so it's appropriately different from an actual class of nobles within the race. But don't tell them that. 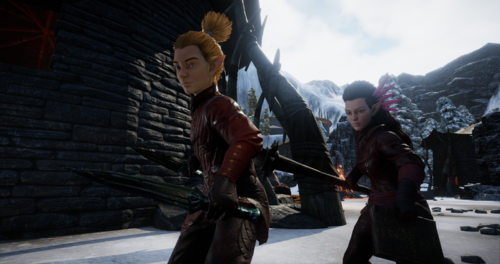 It is said that if you spend one day on Terminus, spend it in the company of the Halflings and their hideaway town. An inherent mirth and musicality sit atop their combustible depth, which make friendships easy, passions flammatory and loyalty inescapable. And like many of the castaways on this globe, the Halflings were not always so composed. At one time a people of “full” stature, their lot was to roam across the vastness of their ancient homeworld Hiryth, under constant fear for their survival. “‘On the run’, Marthus spoke, ‘We are always on the run. We've never had a home. Never a perch, from which to look over ourselves. Not a time, by which we pace our work or rest. Not a place, from which we depart and to which we return. We've barely existed, because we’ve never stayed in one place long enough to change it.

Father, you have spoken to me the tales of our flight since I was a child, and I have heard in those pages a line unspoken. For Kiren, the Ward of Flame revealed himself to me in the wood, as he has so many of our people since First Sight of his appearing. Yet I believe he means us not to run. I believe he means us to fight.’”

- Excerpt from ‘The Maiden and the Lad’ .

Thereby through the people known as the Kiri was the town of Kirensound born, a name taken to honor their protector, Kiren, the Ward of Flame. For there were Six Wards of Hiryth, though Kiren loved this race above them all, and they had adopted his name in thankfulness to his care. But the Ward of Flame was not charged to watch over the Kiri, rather his was to rule over a race beneath the surface of Hiryth. Yet Kiri loved the light and his people, though as punishment for his rebellion, he was sworn to never speak to the Kiri, yet could lead them in silence for a time.

But in this hour, the discernment and bravery of a young Kiri named Marthus rallied his nomadic race to claim a land for their own. For many years they had feebly escaped from one habitation to the next, fleeing a dogged adversary known as the Ferrath. Yet in the Mountains of Ommel, Marthus led a defense against the Ferrath. In the height of battle, the Ward Kiren added to the First Sight and granted him a First Magic: to wield fire. From this the Ferrath retreated, never to threaten the people again. And so too did Ward of Flame forever depart, never having uttered a single word to the race he so long watched over.

Kirensound prospered in short order, the young mountain town benefitting from residents proud to till, clear and build upon their own land. Before long it behaved more like a kingdom, and after Marthus, rule was passed through a line of monarchs until the coronation of King Olenspeth the III. Yet on that night the new king personified the soft luxury of Kirensound's era of fortune, imbibing the present and hazy on the past. For the Mountains of Ommel held another kingdom far below its heights: the realm of Molsth, the Laughing Wraith, King of Specters. Kiren’s gift to Marthus had caught the Laughing Wraith’s attention long ago, and on this night he sought to ensnare his descendants.

Pretending to honor King Olenspeth, a disguised Molsth presented the choice of two gifts to the regent: eternal life, or a reign of peace. When the naive king chose to never die, the Laughing Wraith howled for glee and revealed himself. Soaring above the assembly, he cursed the entire population with a birthright affliction that would diminish their physical maturity of the next ten generations. The last generation of the race would be born only as souls, which Molsth foretold with a squeal would be used to restore him to physical life, along with the might of the First Magic. King Olenspeth was granted his portion, however, fated to watch his people disappear into ethereal subjugation.

Yet in the fifth generation, a maiden of Marthus’ line named Lyone sought out the wraith in his cavernous underworld. Deceiving him with a disguise herself, she challenged Molsth, who thought her a harmless, misguided child. By this time her people had been reduced to permanent adolescence, even at the peak of their lives. And though truly a youth, Lyone was a great student of riddle and the tricks of the Laughing Wraith. Declaring herself, she wagered the remaining five generations of her people against Molsth’s wit, and the greedy King took the play without contemplation. So gleeful was he, that when Lyone proposed a further ante, Molsth again complied --

“Your laugh," the Maiden spoke into the sonorous deep. "If I outwit you, we Kiri shall gain your laugh -- and you shall fall forever silent."

Though Molsth became solid at the thought, his hubris permitted him consider but only for a moment....

"Agreed," he returned, in a voice like a thousand vapors.

Yet threaten and travail as he might, Molsth could not unwind her riddle. Trapped in his greed, the wraith surrendered his laughter and the suffocating curse upon the Kiri was broken. Molsth's laugh, for decades the haunt of every nightmare in the kingdom, was transformed to the emblem of his victim’s joy -- and the Laughing Wraith became the Silent Wraith forevermore. In that hour their new namesake as Halflings took root, for the curse could only be halted and not undone. This fifth of ten generations embraced their "halving" as a harbinger of mercy.

Upon Terminus, there are evidences of that past still alive in Halfling society. The Esqaps, many of whom still carry the blood of Kiri nobility, have a high but sincere mind about themselves and would return to Hiryth and Kirensound if they could. Maidyn Clan is an unrevealed group, even amongst the Halflings themselves. Seeking to honor the sacrifice of Lyone, they care little for the internal affairs of Wild's End, often venturing far beyond it. The Nothi are an unrepentant, wild breed. They fight, sing and adventure with -- as they believe -- justified rebellion, embracing the youthful gift of the unfulfilled curse. Their heritage as wraith hunters is dreadfully serious, however. To avenge the wrongs of Molsth, they persecute his ilk in every crevice of Terminus, chasing whispers that the Silent Wraith smolders in secret somewhere among the realms.

This is the current basis for the look of Halflings, as revealed by:
Forrest Imel (Concept Artist), Jared Pullen (Senior Concept Artist)
(These are works-in-progress as at October-2017)