Resurrected from the total devastation of the Deicide War, Faerthale Forest is a living testament to how well Elven craftsmanship melds with the free reign of nature. Trees, plants, and wildlife are a harmonious mix of both S’iolaen and Terminus, reaching an even consistency, as the Elves are careful not to dilute the valley too much with their own influence. To the novice traveller, Elven cultivation of the land is easily missed, as is their intent. Yet when their delicate tells are learned, Elven handiwork becomes wondrously apparent, a language of the eye that speaks of deep affection.

In the early days of Elven rule, the edge of Faerthale Forest was the most a simple adventurer would see of the valley. There were few pathways through the wood, yet they were crafted as much to confuse as to reveal. For in those days, the Ashen way of thinking kept a heavy hand upon the realm, and the need to defend against “the foe unknown” was as important as trade or alliances.

Today the entrance from the Silent Plains is still guarded by the wood, but pass through and you’ll find the hardy residents of Lo’thale give a more hospitable welcome than those years of old. 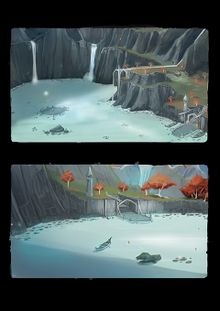 The Field of Fallen Stars

Elves do not bury their dead. In the days on S’iolaen, their life on the run from the Tohr’mentirii was so nomadic they began to burn corpses rather than bury them. Instead, small artifacts known as Ashstones were created from the remains of the dead, then carried by loved ones, often around the neck or elsewhere. On Terminus this practice is still carried out in a formal but similar manner, with the field serving as a body-less graveyard of headstones.

Flowing out from the Soul of Aegis and over the roots of the Lucent Tree, the N’ylem is a clear and cold body of water. Never fast or very deep, save for the pools, the N’ylem is essential to the pristine health of both Faerthale Forest and Oldwood, often given a lesser but complementary regard to the Lucent itself.

The Lake of Morning

Fed by a Roan mountain waterfall, this mysterious body of water gifts the valley with a nourishing blanket of fog before each sunrise. Upon its idyllic face dance the Ashrent, luminous spirit creatures formed from the ashes of the dead and the mystical properties of the lake. When the ashrent are ready, they will pass through the Temples of Dusk and Dawn at the foot of the falls, leaving behind the mortal plane forever.

As mentioned, the Lucent Tree is the centrality of Elven culture. Nothing else has so defined their civilization, across two planets and for thousands of years. In truth, the Lucent is the offspring of two previous trees, both of which perished on S’iolaen. This heirloom of Elven existence nearly met the same fate as its forebears when the Revenant took Faerthale 500 years ago. Countless lives were lost defending the tree, most of which were Ashen Elves, even when the chance of victory was long since dead.

Interestingly, if not for the sheer number of Ashen that perished in the last battle for Faerthale, the nascent Ember Elf leadership may not have had an opportunity to form at all. Historians suspect the Ember would never have gotten a foothold if not for the brave, martyred forefathers of their modern day rivals. Yet a vacuum of leadership did emerge after the Deicide War, giving rise to the upstart and passionate third branch of Elven society.