Enchanters are a class available to players in Pantheon: Rise of the Fallen. The primary function of an Enchanter is Crowd Control, a role which focuses on controlling the battlefield by limiting how many foes can participate in the fight. Enemies that haven't found themselves locked in a mesmerizing trance or charmed by an Enchanter will find themselves wracked by debilitating spells that prevent them from casting spells, lower their attack speed and weaken their resistance to magic. 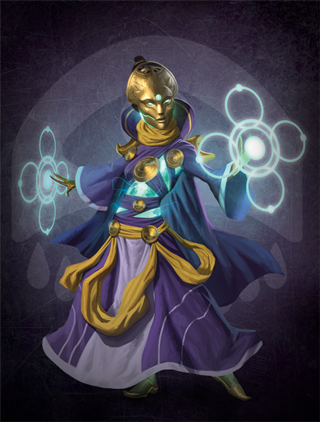 A Gnome Enchanter (Or is it?)

Like the current of a raging river is the pull of an Enchanter on the mind of their adversaries. Through a single word, the Enchanter can turn the intent of an enemy and break even the strongest of wills into submission. Whether through trickery or coercion, the Enchanter is adept at controlling the battlefield and forming order out of chaos.

For an in-depth guide, including tps on making an optimal Enchanter, see the Enchanter Guide.

Crowd Control (CC) refers to a variety of spells and abilities whose aim is to limit an enemy's ability to participate in a fight. There are two primary forms of CC: loss of control, and positional control.
While many classes have some forms of CC to aid the group, none can match the Enchanter when it comes to controlling the battlefield. Enchanters can mesmerize (mez) their foes, forcing them to cease attacking and stand in a trance until the duration is up or the target takes damage (25px Mesmerize). An Enchanter can also choose to charm one of their foes and force that target to fight for them (25px Charm).

Utility is a broad category. It can perhaps best be thought of as a sum of all abilities that do not fall under the other categories (Tanking, Healing, Damage Dealing, Crowd Controlling, Supporting)
Enchanters have a wide range of utility spells, such as illusions (25px Squee’s Mimicry), spells to pacify their enemies and lower their agro radius (25px Control Breath), and spells to temporarily increase a player's unique faction standing (25px Lyrith’s Grace).

Support. A class in the support role has access to beneficial abilities designed to help their teammates survive and fight beyond their normal means, as well as detrimental spells to lower the efficiency of their enemies.
Though not officially listed as a role, the Enchanter has multiple support oriented abilities, such as spells to boost attack speed (25px Illusion Graft: Quickness) and mana regeneration (25px Enshire's Faint Whisper). Their direct damage spells also restore mana to the Enchanter and their group (25px Flay the Mind).
The Enchanter can debilitate their enemies, silencing magic-wielding foes to prevent them from using their spells (25px Hush). They can also lower the attack speed (25px Illusion Graft: Quickness) and the damage their enemies are capable of dealing (25px Eyumai’s Dulling).

Will Enchanter’s be the top DPS through charm? How powerful will a charmed mob be?

While much of this will be tuned in Alpha and Beta, the general design direction is that NPCs will not be at 100% strength when charmed. For the Pantheon Enchanter, charm is primarily designed as a CC mechanism, not a DPS mechanism. That said, there will likely be ways to reduce the penalty applied to a charmed NPC’s power. You will also have access to certain NPC’s abilities when charmed, which will make the decision of what to charm and how to use it much more interesting.

Will entity based illusions (such as Illusion: Ogre) allow the Enchanter to not only look like the entity, but take on it's traits or characteristics as well?

I don't have a definitive answer yet, but I will say I am a big fan of progression. You can see in a lot of the different class designs where something starts small but then becomes more significant as you grow in power. I would love to see something like illusion starting off basic, and just be a visual illusion--you appear to be something that you're not. Maybe there's some faction changes that come with that. But then also seeing a path of becoming more adept in your illusory arts where it may eventually border on something like transmutation, where you physiologically turn into the thing and take on it's traits and characteristics. I think something like that would be really cool.