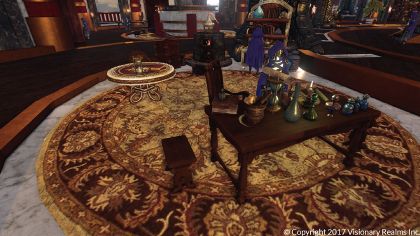 Pantheon’s Crafting and harvesting in this internal pre-alpha is currently a very simple system. With it we can combine two or more items in a container to return a new item. Combinations use a skill associated with the materials, such as Blacksmithing for metals, Alchemy for potions, Tailoring for cloth, and so forth. It is functional, but we feel it lacks impact and depth. As far as what professions are concerned, we're considering the following as our professions:

A major goal of the Crafting system is to provide players with a means to gear up through the power of choice. Dropped and quested items come with set stats but crafted items can be customized. The offset to this power of choice is that crafting will require effort to gather the necessary materials for particular results, whereas dropped items are a (potentially) simpler matter of killing the requisite NPCs to get your gear.

For example if Gereon wants a Silvered Longsword. He plans to be fighting wererats in the City Underneath in a few days with his guildmates so he has two choices:

In this scenario, perhaps Gereon doesn’t have easy access to NPCs that drop Silvered weapons. He has been killing the wrong city’s guards so it is safer and faster for him to find a player to help him out. Crafting gives players like Gereon alternate avenues to acquire those items they need while serving a dual purpose: socializing between players through Economy, and giving players avenues to some solo content (the Crafter or Harvester).

Crafting will also allow us the opportunity to further improve almost any items to be better suited to specific situations.

Gereon has acquired his Silvered Longsword:

The trouble is that his Silvered Longsword isn’t so great against the other vermin or the slimes inhabiting the particular area of the Waterworks near the wererat lair. Gereon really wants to have an edge fighting at least one of the two additional types of enemies in the Waterworks that he knows of. He could:

Additionally, crafting needs to compliment the other areas of gameplay. One big way that crafting will figure into this is most of the items that come from quests, NPC loot, or crafting can be further upgraded. Doing this requires "customizing" the item(s) to the recipient, unlocking additional stats at the cost of causing the item to be bound to that player.