Climates are extreme environments found in Pantheon: Rise of the Fallen that can cause detrimental effects to player characters. These effects can be mitigated through the process of acclimation. Each of these extreme climates have tiers associated with them corresponding to how punishing they will be to players. For example, players may be able to survive in a Tier 1 environment without any acclimation, but will certainly experience some detrimental effects, like a weapon or movement speed penalty. The higher the tier, the more detrimental and severe the effects are. Some climates can be found within other climates. 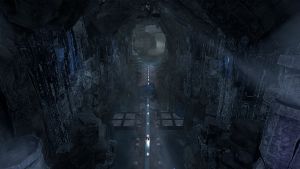 The treacherous depths of Amberfaet are an extremely Frigid climate.

Archai with Water attunement, as well as Dwarves, have an innate bonus to their Frigid acclimation scores

Archai with Fire attunement have an innate bonus to their Scorching acclimation scores.

Archai with Earth attunement, as well as Dwarves, have an innate bonus to their Toxic acclimation scores.

Dark Myr have an innate bonus to their Anaerobic acclimation scores.

Dark Myr have an innate bonus to their Pressure acclimation scores.

Archai with Air attunement have an innate bonus to their Wind Shear acclimation scores.

Each of these Extreme Climates have 5 tiers of potency with which they can exist in the world. The higher the tier, the greater the scope and severity of its effect on players. Additionally, the higher tier an Extreme Climate is, the more Acclimation is necessary for a player to occupy that area safely. Each climate will have its own set of “core” and “sporadic” detriments it can inflict.

Core Detriment
An Extreme Climate’s core detriment is the effect that will apply to all players immediately upon entering the climate area. The core detriment will typically consist of several layered effects which can be mitigated by increasing the Acclimation score towards that specific climate.

As an example, let's look at Frigid Climate's core detriment:

The Sporadic Detriments and their effects are:

Acclimation is the process in which a player character mitigates the effects of climates. There are several ways players can mitigate the effects of Extreme Climates. Certain items and buffs will provide a degree of protection, your character can naturally acclimate--to a certain degree--to dangerous climates by persisting in them, and certain racial passives (See above) will also help. There will also be an Exposure mechanic allowing players to temporarily build up a further degree of Acclimation by persisting in the same climate for a period of time.

But the main mechanic which will provide the highest degree of protection is the Acclimation system, through which players can use Glyphs to increase their Acclimation score for specific climates (or combinations of climates), allowing them to enter and adventure in these harsh and deadly areas. 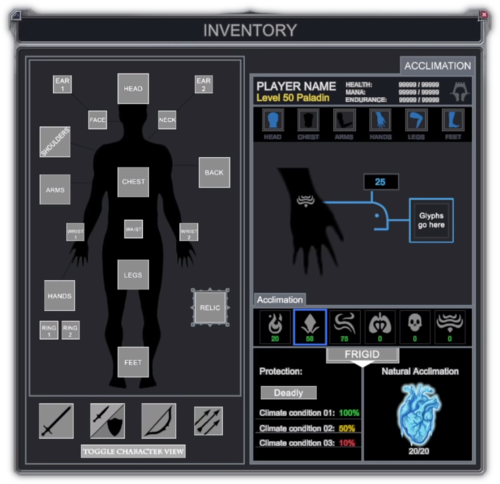 The Acclimation page. This character has Acclimation Infusions in their head, hands, legs and feet. [Pre-Alpha]

1. The available slots that you can apply infusions and glyphs to. Note that, when a slot has an infusion, the icon will be lit up. Below the slots, the UI for applying infusions is displayed. The number represents the strength of the infusion, while the icon on the left represents which climate the infusion protects against.
2. Below the infusion UI are icons representing the 6 deadly climates. The numbers below the icon represent your current, total resistance to the climates across all of your equipment and racial stats. The tab is automatically switched to whatever climate you are currently in. (E.G: if you are in a Frigid climate, the tab will automatically be swapped to display your Frigid resistances.)
3. This area, in the bottom left, tells you the severity of the climate you are in. The names of potential climate detriments (NOT PICTURED) (see above) will also be displayed, along with your resistance to them. Hovering over the name will display a tool tip detailing the status effect.
4. This area, in the bottom right, displays your current and maximum natural resilience to the climate you are currently in. Characters can gain a certain degree of non-racial, natural resistance by being in these harsh climates for long enough.

About Glyphs
There are 6 parts of the body that Glyphs may be applied to: Head, Chest, Arms, Legs, Feet, and Blood. Glyphs will contribute differently to that score depending on the quality of the Glyph and which part of the body they are applied to

Glyphs are rare and difficult to attain. They can be found off of powerful enemies in the world or created by max-tier Crafters through recipes requiring rare and valuable components. When acquired, Glyphs will populate a collection list within the Acclimation window of the UI, organized according to climate type, quality, and body location. Once you have found a particular type of Glyph, you will have it to use indefinitely, allowing you to mix and match your Glyphs more freely as your collection grows.

Glyphs will be identified by 3 parameters:

(1) The climate type they correspond to.
(2) The Glyph quality, which determines how much it will increase your Acclimation score towards that climate.
(3) The part of the body it can be applied to.

An example of a low vs. a high level Glyph:

The decision of what types of Glyphs to use, where to apply them, and the overall Acclimation score a player needs for the various climate types is the intended strategy of the system.

An example of this system in action: a player is trying to Acclimate to a high level area in the frozen South, which happens to be located within a tier 5 Frigid Climate. Including buffs, gear, and their racial passive as a Dwarf, they are sitting at a Frigid Acclimation score of 50pts. However, to be fully acclimated to a Frigid T5 climate they need a Frigid Acclimation score of 250pts. In this case, the player would need to use Prime Frigid Glyphs on every available part of the body.

An alternative example: a player is trying to Acclimate to an area with multiple climate types. Perhaps this is a volcanic region that has a tier 3 Scorching Climate and a tier 2 Toxic Climate. To achieve full acclimation in Scorching T3, let’s say the player will need a Scorching Acclimation score of 120pts. And for Toxic T2, the player needs a Toxic Acclimation score of 80pts. In this case, the player would need to mix their Glyphs, perhaps applying their Scorching Glyphs to the blood, chest, and arm slots, while applying the Toxic Glyphs to the head, legs, and feet slots. This would give the player the holistic Acclimation they need to survive in this area.