Clerics are a class available to players in Pantheon: Rise of the Fallen. They function primarily as a Healer, with strong Single Target healing and many spells that aid in the prevention of damage. Like Paladins, they are steadfast opponents of the Undead, possessing powerful nukes and debuffs designed to banish any that they cross.

It is the Frail Age of Terminus. After the horrors of the Deicide War, interaction with the Celestials has become virtually unknown. Thus, the Clerics can hardly rely on their Pantheon directly. Instead, they must bind themselves to the ancient directives of their Order, guided by the written wisdom of the Celestials of ages past. Clerics are focused on healing and dealing damage to their enemies through melee combat and faith magic. They can manifest astral Paladin sentries to fight for/with them.

To his core, the Cleric is focused on healing himself and his allies, and in this role he has no equal. But the Cleric can also dramatically enhance the defenses of his allies through the use of powerful signets, potent writs and ethereal armors. Though few in number, Clerics can perform feats of stunning ability once empowered with a measure of their Celestial’s influence. Indeed, for this very reason, certain elder Clerics are mistakenly revered as true Celestials! Because of the Cleric’s searing devotion to the Celestial path, they have evolved the means to turn the Undead and other malignant beings. 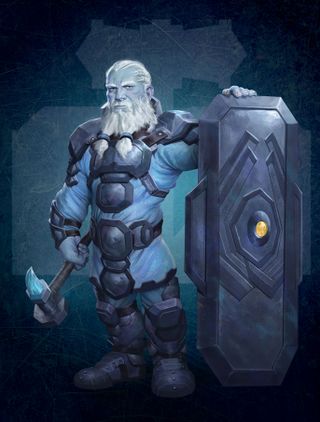 Clerics have mastered the restorative arts of their Order, allowing them to use a myriad of potent healing abilities. But the Cleric can also dramatically enhance the defenses of their allies through the use of powerful signets, writs and ethereal armors. Imbued with Celestial power, Clerics can perform feats of stunning ability. Indeed, for this very reason certain master Clerics have been mistakenly revered as true Celestials! Because of the Cleric’s affinity to Celestial light, they have evolved the means to turn Undeath and other cursed beings.

Healer. The role of the healer is a critical one. The healer's job, first and foremost, is to ensure that none of their teammates die. Within an ideal group set-up, the Healer can focus the majority of their healing on a single teammate: the party's Tank.
Among the Healers, Clerics have the strongest single target healing spells (

Burst of Life). With their ability to wear full plate armor and wield shields, Clerics are the sturdiest healer and should not be afraid to enter melee combat and display their skill with blunt weaponry (25px Favor of the Order)

Support. A class in the support role has access to many beneficial abilities designed to help their teammates survive and fight beyond their normal means.
For the Cleric, this is primarily seen through their powerful maximum Health boosting spells (

Utility. Utility is a broad category. It can perhaps best be thought of as a sum of all abilities that do not fall under the other categories (Tanking, Healing, Damage Dealing, Crowd Controlling, Supporting)
For the Cleric, their Utility is expressed through spells such as

Edict of Stillness, which reduces the aggro radius of a mob, or Celestial Aegis, which provides a solid wall of light that enemies cannot pass through.


While not their official role, Clerics are a sturdy class capable of wearing shields and full plate, which can enable them to act as emergency off-tanks. Though they will struggle with holding the aggro of the mob, it is worth keeping in mind as a cleric.

How will Celestial Aegis actually work? Will we see massive trains from NPCs not being able to path to the player and being forced to find a different, NPC-filled way around the barrier?

When NPCs encounter the Celestial Aegis barrier, they will be limited in how far away they can look for a path around. If they can’t find one within that range, they will try to break through the barrier. The barrier will have a certain amount of HP - therefore, it will either dissipate when the NPCs break through or when the barrier’s duration ends, whichever comes first.

How is the summoning and usage of Celestial Tomes going to work? Do I have to have it equipped in my weapon/shield slot to work?

Clerics will be able to summon tomes in the early game. They will go into your general inventory and you can equip them from there. But once that falls off [once clerics no longer gain new summon tome spells], you will begin finding more powerful, rare tomes out in the world.

Yes, you do have to have them equipped. They are a secondary/off-hand item, so they'll fit in the same slot that a shield would.